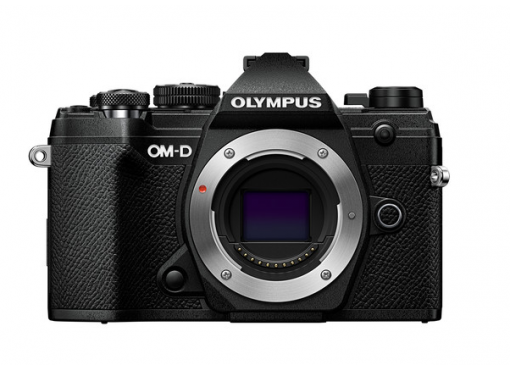 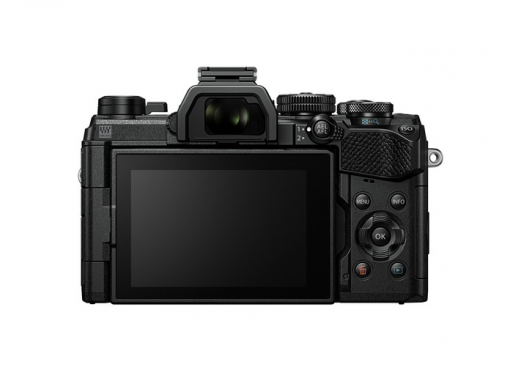 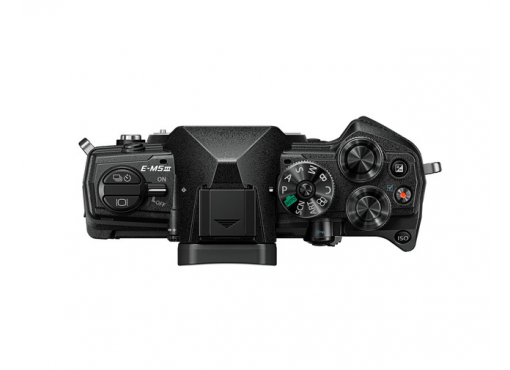 Many components of the E-M5 Mark III, including the image stabilization unit, have been miniaturized in an effort to deliver the smallest body possible. Dramatic improvements in power-saving performance make it possible to use the more compact BLS-50 battery to enhance the lightweight, compact design. Experience complete system mobility when pairing the E-M5 Mark III with the diverse lineup of high-resolution, lightweight, interchangeable M.Zuiko lenses. The Olympus OM-D E-M5 Mark III is equipped with features found in high-end OM-D models, packed in a compact body that is approximately 55% the volume of competitive full-frame mirrorless systems.

It features the highly acclaimed dust-proof, splash-proof and freeze-proof weather-sealed design that Olympus is known for, to allow continuous shooting even in the most severe environmental conditions. The E-M5 Mark III delivers a modern take on the striking, iconic design of the traditional OM system with advanced styling, including a moulded exterior, refined grip and a retooled mode dial. The body also features an updated Custom Mode setting, to recall frequent settings for easy access while shooting. The BLS-50 battery contributes to the compact, lightweight body while offering a power saving design, allowing the same number of shots as its predecessor. The BLS-50 battery captures approximately 310 shots per charge.

The OM-D E-M5 Mark III boasts the same 20 Megapixel High-Speed Live MOS Sensor found in the OM-D E-M1 Mark II, offering superior performance, exceptional clarity and speed in all aspects of image capture. Maximizing that performance are the TruePicTM VIII image-processing engine and 5-Axis Image Stabilization unit. When paired with high-resolution M.Zuiko Digital lenses, it is capable of capturing images with minimal noise even at high-sensitivity settings, and delivers high image quality with minimal distortion up to the edges of the shot. The E-M5 Mark III features Anti-flicker Shooting to help suppress the effect of flickering light sources while using both the mechanical and electronic shutter.

The OM-D E-M5 Mark III is equipped with 121-point all-cross type On-chip Phase Detection AF for precision focusing, even for fast-moving subjects where focus is difficult, or in low light situations, a staple feature in the E-M1 Mark II. Unlike DSLR cameras, there is no degradation in AF precision when using a fast lens. The E-M5 Mark III offers high precision, high-speed focusing from the maximum aperture setting with all M.Zuiko Digital lenses, regardless of subject patterns. The algorithm has been improved over previous models, preventing focus from unexpected jumping to the background, even in mixed perspective scenes with near and far subjects. AF/AE tracking supports 10fps high-speed sequential shooting (silent sequential shooting L) and 30fps with focus and exposure locked after the first frame, for capturing subjects with intense movements. The moving subject tracking algorithm utilizes AF information from both Live View images and recorded images to enable quick tracking of unpredictable subject movement and changes in subject speed.

The 5-Axis Image Stabilization device, including the actuator, has been redesigned for the E-M5 Mark III in order to deliver a higher level of stabilization in a smaller package, resulting in a smaller and lighter body. Based on camera shake information obtained from the high-sensitivity gyro sensor and image analysis, the TruePicTM VIII image processor precisely controls the image stabilization unit to provide up to 5.5 shutter speed steps of compensation performance, reducing blur caused by camera shake. Increase that to 6.5 shutter speed steps3 with 5-Axis Sync IS when the OM-D E-M5 Mark III is paired with M.Zuiko Digital lenses equipped with in-lens image stabilization.

Pro Capture mode makes it possible to record scenes that are difficult to time at a full pixel count of 20M, such as a bird taking flight. From the moment the shutter button is pressed fully, 14 frames are retroactively recorded and retained, making capturing the perfect shot simple. Up to 30 fps high-speed shooting is available in Pro Capture H. RAW recording is also supported.

Focus Bracketing can capture up to 999 shots with a single shutter activation while shifting the focal position slightly between each shot. The amount of focal shift can be selected from 10 levels, and recorded images can be combined into one single, evenly exposed image, using Olympus Workspace V1.1 image editing software. It is possible to create a single image with a depth of field that cannot be obtained simply by stopping down the aperture. Because the aperture is not stopped down too far during shooting, this feature also enables high image quality.

The camera is also equipped with Focus Stacking, which automatically composites images on the camera. Eight photos with different focal positions are composited on the camera for a photo with a greater depth of field that is in focus from the foreground to the background. 50MP Tripod High Res Shot Tripod High Res Shot shifts the image sensor in 0.5-pixel increments while capturing eight sequential shots. These shots are then merged into a single 50MP equivalent high-resolution photo. This feature is perfect for landscape shots, product photography in a studio, and other situations that require ultra-high-resolution images.