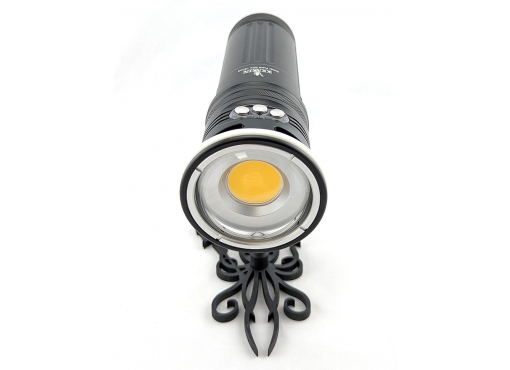 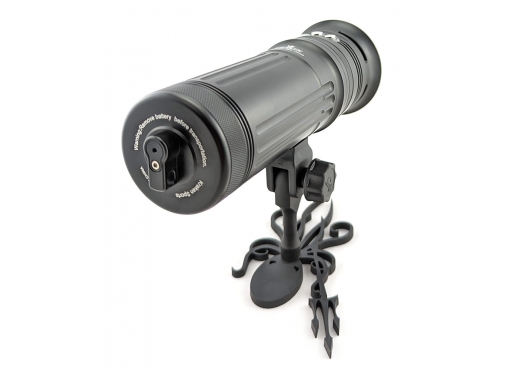 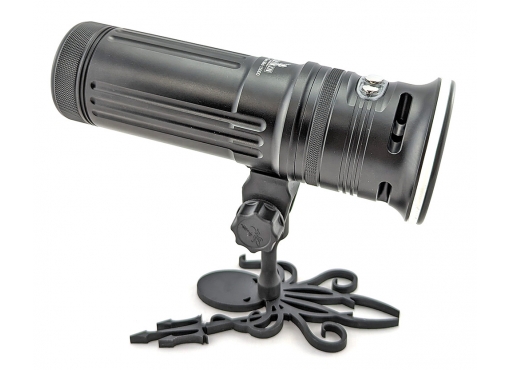 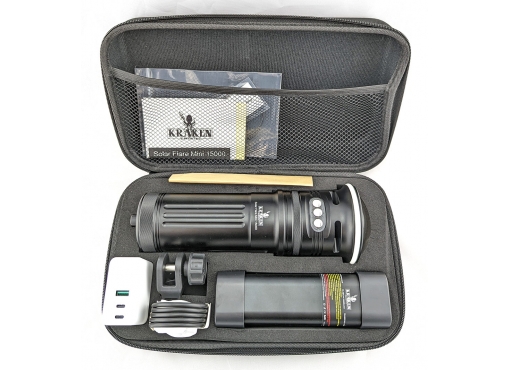 New Version -  More Power, 3 Button Design, improved Charger! Compact size with a wide beam, the Kraken Solar Flare Mini is the answer for the traveling diver who needs high power, 12,000 lumens, video illumination. It has an accuate 85 CRI 5000K color temperature.  It features the same Kraken three button controls as their other lights - one button for on/off, one for it's highly adjustable 6 levels power settings, plus a sleep mode and one to use the 18,000 lumen burst mode for still shots.

It supports the Kraken Remote Control, allowing you to adjust it's amazing output from your fingertips via a fiber optic cable.

The Solar Flare Mini utilizes a COB LED source, which are well-known for their soft, wide and even light. It's light is a pleasing 5600K daylight color temperature.

It's illuminated bezel lets you know how your remaining burn time with the bezel changing from blue to green to red.

It uses a battery pack that can be easily swapped for a fresh one. It's 97 watt/hr size is transportable on airlines. Burn time at full is 66 minutes at 100% flood and recharging is easy. Made from high-quality anodized aircraft aluminum, the Kraken Solar Flare Mini light is rugged, and it's compact 2.5" x 8" size weighs only 1 lb. in water. It's depth rated to 330 feet.

One of the most exciting features of the new Hydra 8000 is the ability to charge via USB C. The included charger contains 3 ports, with the capability to charge up to two batteries simultaneously, plus an additional port to conveniently charge a phone, camera, or tablet – helping to streamline your gear when traveling! The charger is the latest in GaN technology, meaning it’s incredibly small, but still outputs 90 watts!