Video options have come a long way! Chances are, you might already have a camera that is capable of shooting video – so where does your camera fit in? Or maybe you are looking to upgrade and you’d like to know your options?

We've researched some current offerings and have listed several in each product range. Let’s take a look at what’s out there… 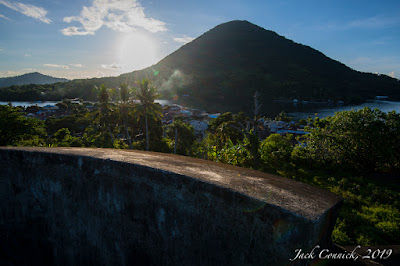 Stories don't have a middle or an end any more.
They usually have a beginning that never stops beginning.
— Steven Speilberg

After a few great days of diving at Tulamben on Bali, I joined up with the rest of the Optical Ocean Sales guests up in Ambon, Indonesia. The 12 of us joined the Damai 1 the next morning and settled into our comfortable cabins onboard. We were headed for Maumere on Flores Island - 1,000 nautical miles away, clear across the Banda Sea which lies lies between Raja Ampat in the north and Komodo National Park to the south. Over the next ten days, we would do 35 dives at some of the most remote sites anyone can imagine. Islands, walls, sea mounts, volcanos, reefs and muck - we would dive them all. 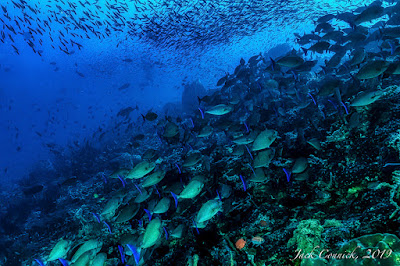 We did two brief dives in Ambon and were treated with a couple of Rhinopias, nudis and other great life there. That night would be the first of many long passages we’d have, crossings taking anywhere from 9 to 14 hours. This would also be one of the few rough nights at sea, for most of the trip it was beautiful weather with glassy seas and no rain, unusual in the tropics. We did four dives at Nusa Laut and were treated to a huge school of Jacks along its sloping walls on a couple of dives.

The next day was a treat, as we were near Banda Island with lots of site choices. The clear winner was Suanggi Pinnacle, which was a fairly large sea mount, probably left over from a volcano. The north wall is steeper and over two days we’d do two dives there and one on the south wall, which was more sloping. A kaleidoscope of different sized fish made seeing the actual reef almost impossible at times. We had glimpses of shy Hammerhead sharks - as we would on and off thoughout our time in the Banda Sea. While we did see other liveaboards, there was always lots of choices of dive sites and the boats cooperated with each other to ensure a good time was had. 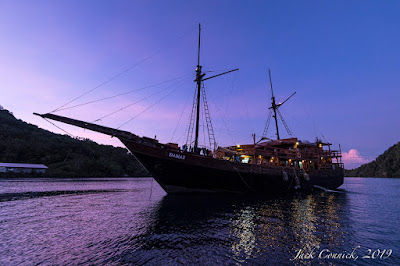 We spent the night quietly at anchor in the harbor at Banda Neira. Banda was the heart of the Dutch East Indies, aka “Spice Islands” dating back to the 1600s. Nutmeg, mace, cinnamon and many other spices remained a heavily guarded crop by the Dutch. Native Indonesians were made to work as slaves and an uprising resulted in hundreds being killed and the establishment of a fort by the Dutch, which we toured, along with a nutmeg plantation. 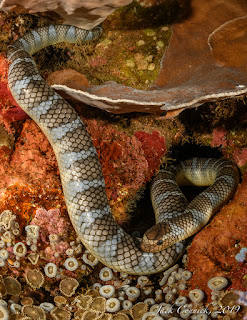 We continued across the Banda Sea, stopping at many very remote and isolated volcanic islands along the way. One highlight was Palau Manuk, aka “Snake Island”. Like something from a movie, this still smoking volcano is home to hundreds of green sea snakes. While cold-blooded, they take refuge among the warm rocks and vents of the volcano. 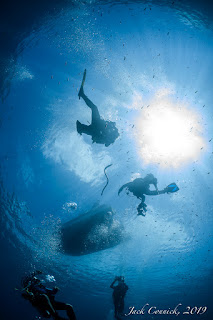 We did four dives there along very colorful and prolific reefs that were filled with all types of fish, invertebrates, soft coral, octopus, and yes, large sea snakes. As the day wore on the snakes become more aggressive (they mate at dusk). They surprised us by swimming right through our legs at times, or swimming over your back and past your mask from behind.

On the third dive at Palm Point, we started along a steep sand/ash slope. Snakes were everywhere, and seeing a big ball of them mating, I started down deeper, but then realized I was in a strong down current and getting sucked down into them. Swimming out and horizontal from the slope, I managed to swim into just as strong an up current, which turned into a sideways current running horizontal along the wall. Down, up, along and through, it was quite a dive.

The next several days were spent island hopping, diving along colorful walls, reefs and slopes. We enjoyed tranquil, blue waters loaded with life both small and large - on many dives we saw huge tuna swim by for instance. Visibility was up and down, sometimes a bit murky for photography, but always good diving. Most of these islands and sites see divers only a few times a year - if that. Remote, isolated and “forgotten”, hundreds of miles away from any inhabited places, they aren’t even seen by local fishermen. It was a real adventure to dive and know we saw places that other divers rarely, if ever, see. 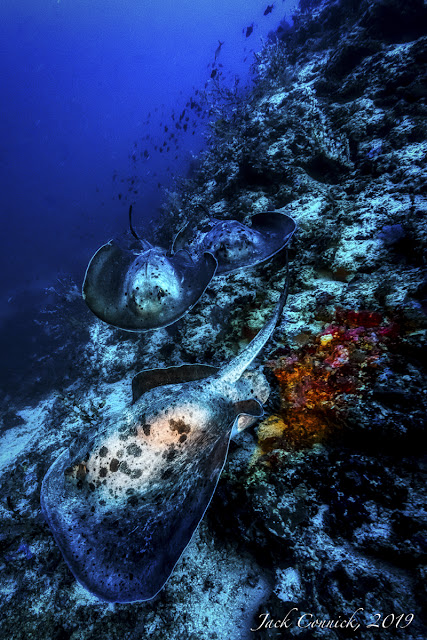 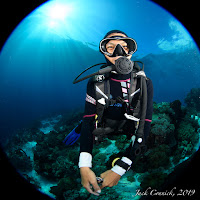 The diving was fairly deep. On many dives we were in the 60-80' range or deeper. On a dive along a wall at Seruo Island, I spotted a group of very large Marble Rays swimming along the base. Taking a chance, I swam downwards hard, to the base of the wall at 119’, intercepting them and took a few fast photos. 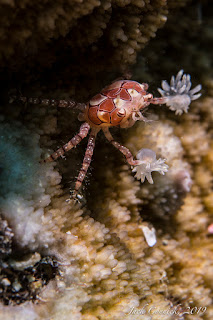 While I was one my third dive along the massive and spectacular walls of Grouper Arch at Nyata Island, my new dive computer suddenly and without warning went into deco. Not just a few minutes, but 50 minutes at 15’! As we were diving nitrox on a single tank, there was no way I had accumulated that much deco. But as we were so isolated, and I was just diving the one computer, I felt an obligation to try to carry out the deco. Finishing my tank, the guides brought me a drop tank and after an 113 minute dive I came out tired and shivering - and the computer still violated itself! I sat down later with the cruise director Carlo and looked over my profiles. We both attributed it to a malfunction. Luckily, Damai carries a complete selection of dive gear and I carried on with another computer. I used both for the rest of the trip. For now on, I’m diving two computers for redundant backup and the miscreant computer has been replaced with another brand. 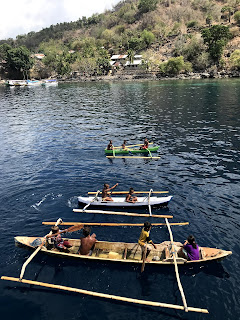 After another long passage we finally entered the calm waters of Alor. Alor is an amazing destination in and of itself with the deep waters surrounding it. However we were in the off-season and had decided to spend our extra time earlier in the trip at Banda. But we still had amazing macro dives at Babylon and Valley of the Clowns, with a colorful and dizzying array of anemones, invertebrates and small critters to shoot. 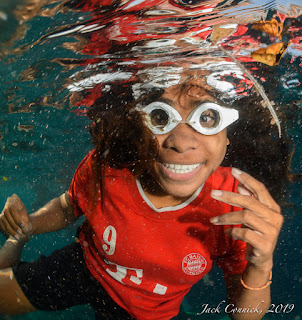 After our muck dive at Jan Village, we were treated with a crowd of kids, surrounding the boat with their outrigger canoes, climbing all over, shouting and giving us high-fives. They were eager to pose for for underwater photos with us. They were so friendly, sweet and carefree to be around, it left us with a warm appreciation for their lifestyle. They were also very careful and aware of their marine environment, knowing that living there takes a symbiotic relationship with the ocean. Which we also felt united with. More photos are on my Flickr site here. 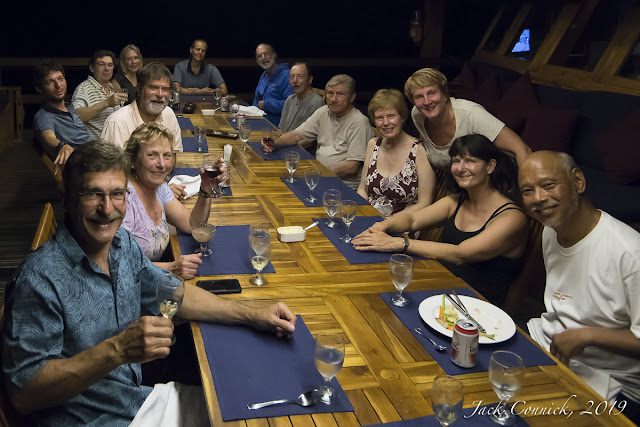 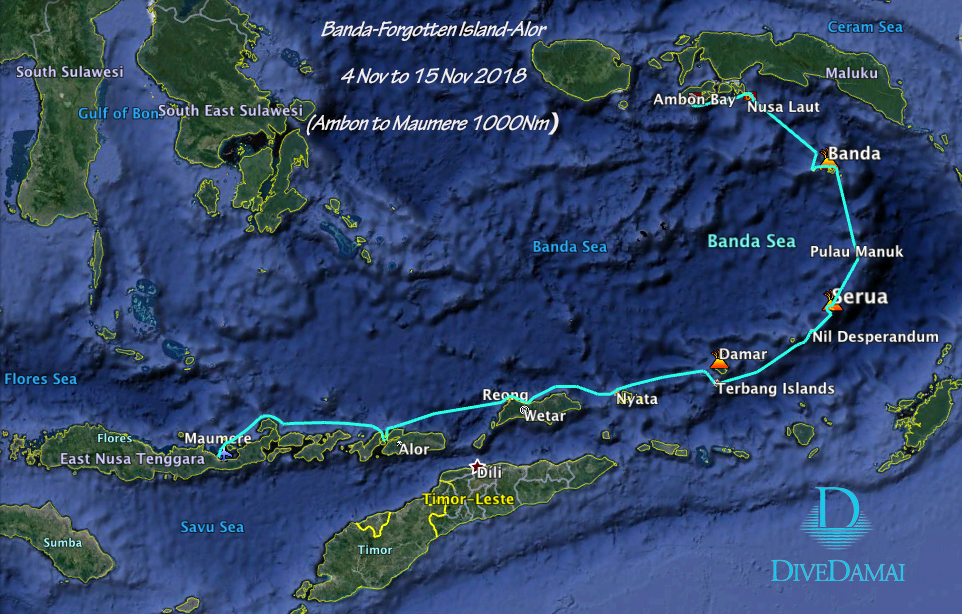