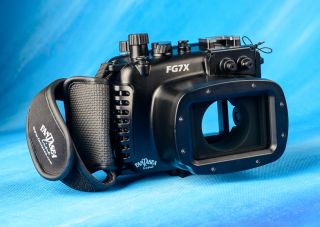 (Or Hell Hath No Fury Like a Dragon Scorned)

Cold and wet aren’t what usually comes to mind when thinking of Komodo, which is hot and dry most of the year. But during the short winter months things reverse. The north becomes cold and the south becomes warmer. Which can be fine; the southern sites are some of the best.

Except when there’s a typhoon blowing off the south of Australia. Then the area can all be very exposed. Which is what greeted us on and off during course of the trip. 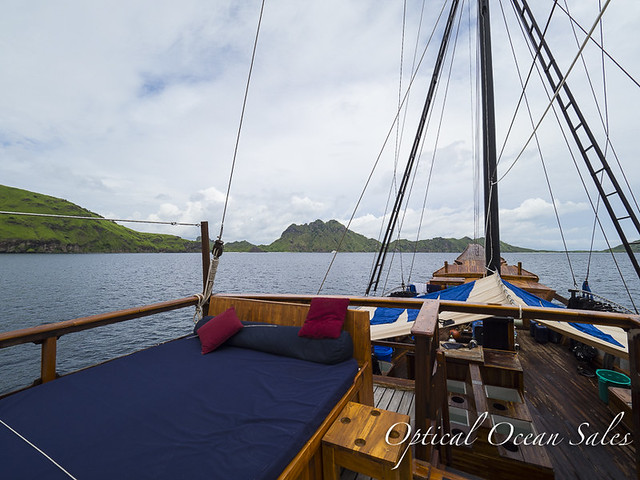 Visibility in the water suffered at times, but good diving was found amid changing conditions of wind and rain. However, we were limited to where we could go. 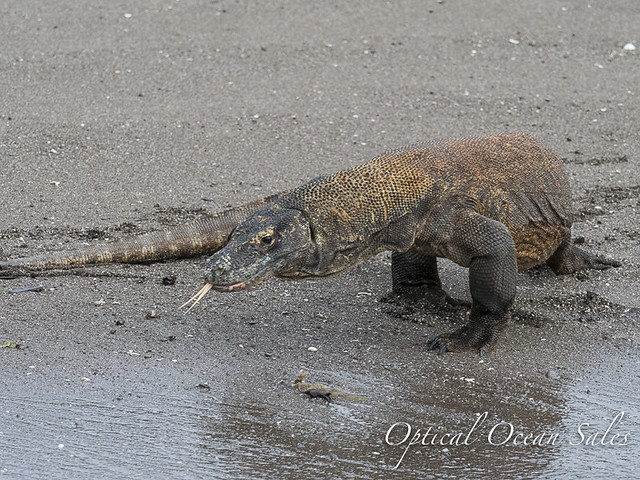 Denise and I managed to get colds on our layover in Bali, but the rest of the group started diving in Padar Bay. After that with a narrow weather window, we made our way south to the shelter of the south end of Rinca Island and anchored behind Pulau Kode doing multiple dives at Cannibal Rock, Torpedo Alley, Yellow Wall and Palau Pisang. We especially liked the good visibility we enjoyed at that site, pretty walls with lots of animals to photograph.

In the evening, we motored into the beach and (from the safety of the boats) we enjoyed watching the wild pigs, monkeys and Komodo Dragons. The dragons are huge, slobbering beasts, testing the air with their forked tongues as they slither across the sand. They are afraid of the pigs and it was funny to watch them run away when the pigs appeared.

As wet as it was, we were pampered by the Damai crew with amazing service, great food and comradery. The friendly crew would dress and undress us from our wetsuits, even taking the cameras from the individual rinse stations, drying them and returning them to the large camera room inside the boat. I dove with Indra, the son of a guide I had dove with in Raja Ampat on Damai II. He was just as good as his dad, and excelled in finding tiny nudibranchs, coleman shrimp and other small critters. 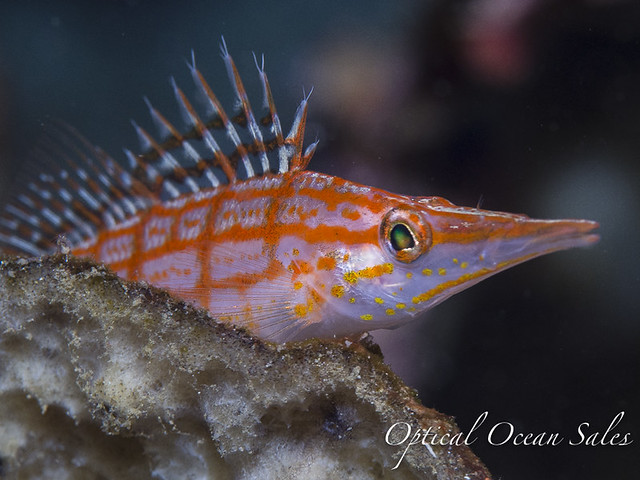 We had good opportunities for macro and some wide angle there. With the weather dying off a bit, we set out to the north to find some mantas at Karang Macassar. We were in luck on the first dive, with several reef mantas flying over us in hazy conditions and strong current. Motoring back to Rinca Island, we anchored the calm of Wainilu and had one of the best macro dives I can remember - spotting a wonderpus octopus, large cuttlefish, several nudibranchs, and a ghost pipefish - all on one dive. 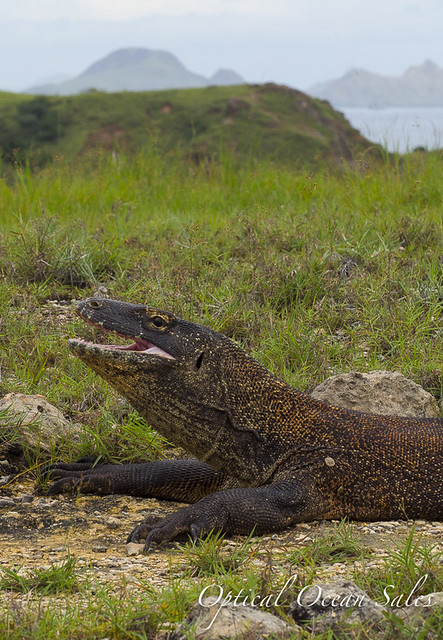 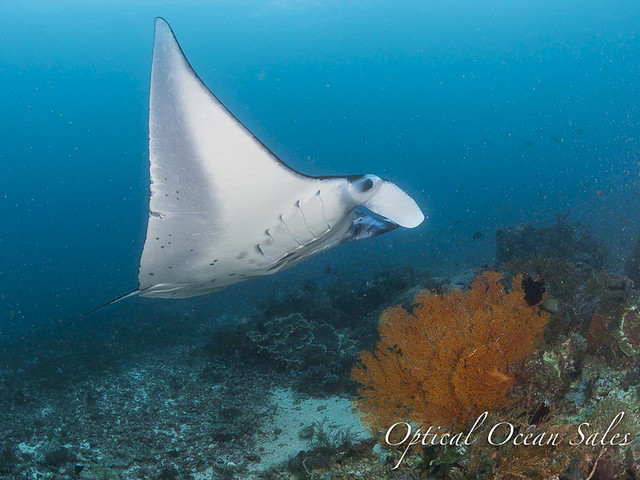 The next morning we took a boat ride and hike on Rinca Island to see Komodo National Park. A ranger led us along muddy trails to their station where the Komodo dragons hang out to eat leftover meal scraps. Although they are lazy, they can move very quickly  – up to 40 mph! Our rangers kept a sturdy long forked stick to keep them away, but they weren’t necessary. I think the cooler weather kept them somewhat sleepy. We also set off on a cross country walk along the trail and encountered another smaller dragon along the way, yawning in the morning light. 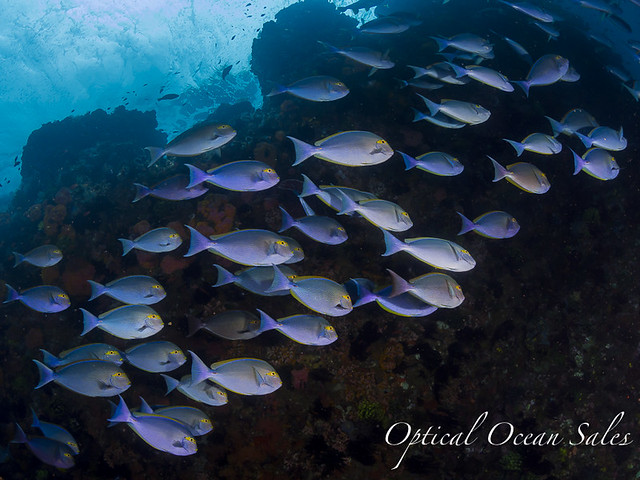 Back on the boat, we decided to go back and try for mantas in a clearer tide the next morning, but although the filming conditions were perfect, there were no mantas to be found. A second dive in hazy conditions was very successful. Mantas love to feed and one of the challenges in shooting them can be poor visibility from the swirls of krill they love to eat.

In deteriorating conditions, we went back to Padar Bay and did a few dives around that area over the next couple of days. The area was rich with lots of fish life and several giant frogfish, schools of surgeonfish, and lots of invertebrates. 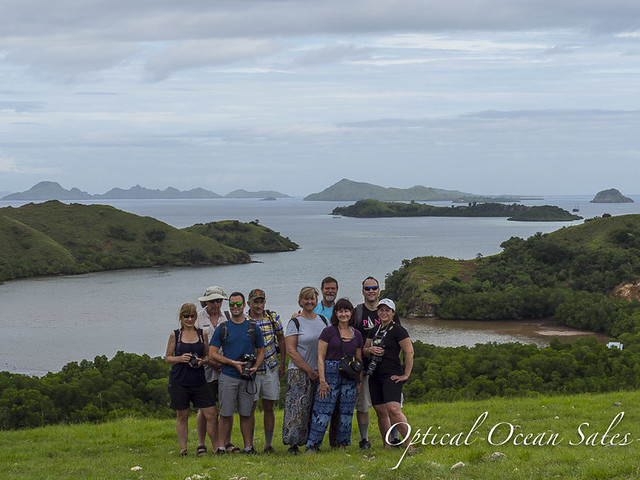 The last day we dove at a small protected island on the way back to Labuan Bajo, which was reported to have some mantas. Not seeing any, we had a long dive, but surfaced to crashing waves and high wind. Indeed, a small fishing boat had sunk and our guide Gusti had spotted the 3 poor fishermen in the water and rescued them while we were down. They were very lucky as it was a remote spot, and they were in the water 3 hours before he spotted them!
All in all, it was a good dive trip, but if I had to go back I would go in late spring when the weather is better. For an incredible diversity of life, Komodo is hard to beat.
-------
Photo Notes: On this trip, I shot the new Olympus E-M1 MKII camera in their PT-EP14 housing. I shot the 8mm FE Pro lens, 60mm macro and for a different look - the 12mm f2.0 lens. The new Olympus PPO-PP03 macro port worked very well with the 60mm macro lens along with SagaDive’s new TRIO switchable diopter. Switching between 3 powers of magnification on the fly made life easy when Indra found a teeny nudi to challenge me my abilities.
I also tried out the Olympus TG-4 with the new Kraken (Weefine) 1000 lumen ring light. I could then set up the larger Oly for wide angle and use the small TG-4/ringlight setup for macro. The best of both worlds! 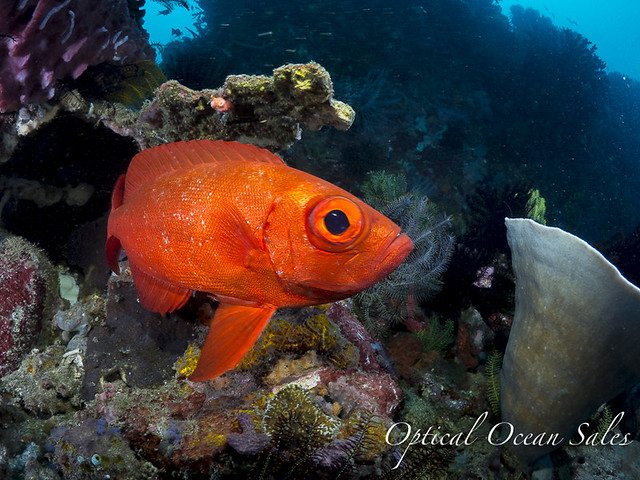