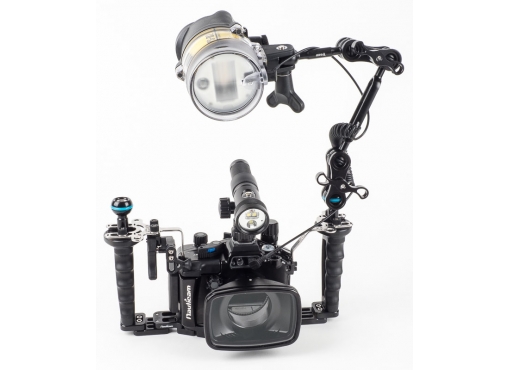 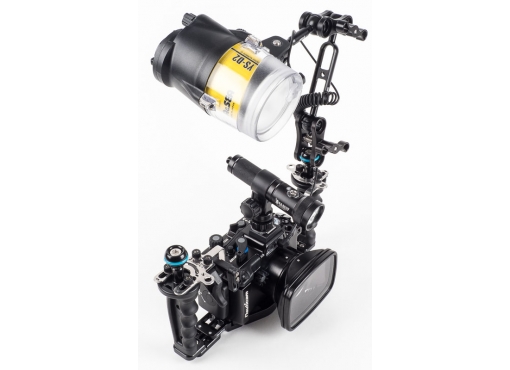 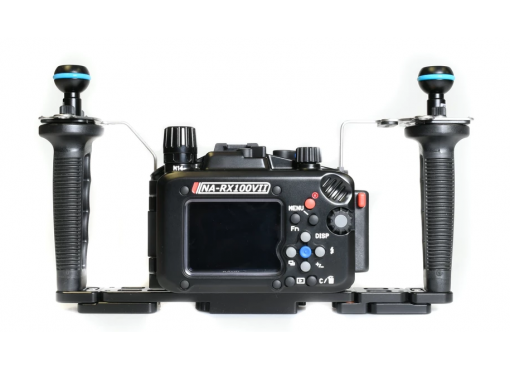 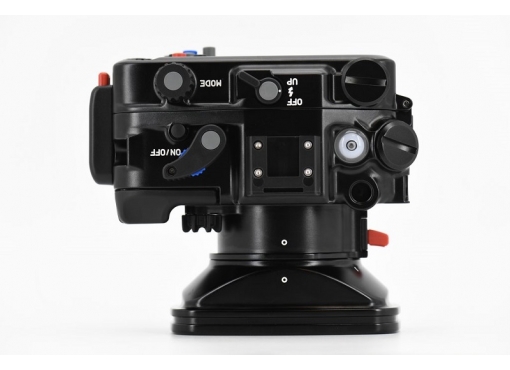 Nauticam has supported every version of the Sony RX100 lineup and with the RX100 VII the housing continues with the N50 interchangeable port system.  The NA-RX100VII features the same innovative and user-friendly rotary-latch locking system and two-stage trigger from previous versions as well as the clearly-labeled and intuitive buttons and dials.

The NA-RX100VII follows Nauticam's design philosophy of placing the camera controls where they are most needed and easily accessible.  The record button is colored red and within easy reach of the right side of the housing, even when using an optional tray system.  The pop-up flash can be activated or stowed with the camera inside the housing, eliminating the need to preset the flash before inserting the camera and allowing quick changes between artificial and ambient lighting scenarios.

The shutter speed and aperture controls feature easy-to-use control wheels, with the front dial sporting large grooves to facilitate fingertip control without having to reach forward.

To maximize the added flexibility of the longer zoom lens on the RX100 VII, the NA-RX100VII features an interchangeable N50 port.  The Standard Port that is included with the housing allows for the use of the full zoom range and is compatible with the 25107 M67 Flip Diopter Holder.  At 90mm equivalent and above, the RX100VII can be used with the SMC-1 wet-optic to achieve true super-macro capability.
Premium Profesional Optics

For super wide-angle, the standard port can be changed for 38702 N50 Short Port with Bayonet Mount.  This port is ready to support the WWL-1 Wet-Wide Lens with the intuitive and convenient bayonet-mounting system.  Zoom range is still accessible but is limited to 65mm equivalent.  The WWL-1 can be changed underwater with the CMC-1 or CMC-2 to give macro capabilities on the same dive.

The RX100VII has HDMI output for video, allowing for the use of external monitors which make judging exposure, focus and composition easier than using the built-in LCD of the camera.  By adding the optional 25028 Socket Extension and 25032 Custom HDMI bulkhead, the NA-RX100VII is compatible with external monitor housings such as the NA-502B-H or NA-Ninja V (HDMI 1.4 connection only).

The Nauticam vacuum check and leak detection system is shipped with NA-RX100VII as standard equipment. Combined with an accessory M14 Vacuum Valve II (PN 25624), this monitoring system provides constant updates on the water tight and safe-to-dive status of the housing. A simple color coded LED lighting system lets the user know that the vacuum is solid, or that the housing is losing vacuum. Leak detection is built into the same circuit, so if there is water intrusion, an audible and visual indication will occur.

The Nauticam system is temperature compensated, eliminating false alarms caused by a change in outside temperature, or from a camera heating up on an action packed dive.

NEW! This new Kraken Hydra 1500 lumen light is part of the new line up from Kraken Sports. It has a lighted push button that switches between a wide 100° flood beam, a red focus beam, and a spot beam for use as a dive light. The button has a lighted battery strength indicator light. It has an 85 min run-time on high.

The Kraken Hydra light come in a complete set that YS style mount, charger and a carrying case.