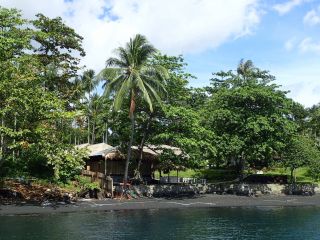 We came, we saw, we took photos, and more and more photos of an amazing variety of small underwater critters at Lembeh Straits, Indonesia October, 2017 With 8,000’ deep drop-offs nearby, pumping huge amounts of plankton into the area, it harbors and fosters one of the highest bio-diversities of marine life found anywhere on the planet.

Fourteen brave folks came along on our first shop trip to Taveuni, Fiji this October. The long flights from LAX through Nadi to The Garden Island Resort went smoothly, and the friendly staff greeted us with warm welcomes and traditional songs. Our rooms were spacious, with fresh tropical flowers, and spa style bathrooms. We were anxious to get in a check-out dive right away, but the dive shop wasn’t prepared for our arrival, so things were bit disorganized. Having had a lot of experience in running dive trips, I was able to quickly get them back on track.

Diving the rest of the week went more smoothly, with two dives in the morning and one in the afternoon. Rainbow Reef, in the Somosomo Straits between Taveuni and Viti Levu was a short 20 min run out, and had a great variety of dive sites, from top-of-the-reef hard corals, sandy slots, to short/deep walls and caves. Currents were up and down, and really took the experienced guides to figure out. They would be running one way on one side of the reef and reverse direction on the other side. Many times we would drift down, then up and over and come back. The wall entrance to The Great White wall was a swim-through that started at 35’ and came out at 80’, then ended with another short swim-though from 65’ back to 30’. Our dive profiles were pretty zig-zaggy as a result, and it played havoc with some divers’ ears.

Fiji has amazing soft and hard corals, gorgonian fans and other invertebrates with Technicolor hues. These incredible vistas left all sorts of subject matter for photography. There are also large amounts of small and medium-sized fish, with a few larger ones wandering by from time to time; white-tip and bronze whaler sharks, a large napoleon wrasse, turtles, etc. The Somosomo Straits doesn’t have as many large animals as other spots, but there certainly is a variety of life.

Our surface intervals were a treat: we were able to pull up to a beautiful park on the other side of the straits that had a wide sandy beach and shady palm trees to take a quick nap under. Fresh coconuts that the guides broke open accompanied our snacks and clouds of small fish were fun to snorkel with.

Go Large or Go Home
While most photographers who travel are moving to smaller rigs I seem to be moving in the other direction. Having started with a small Sea & sea film rig, I moved through the range of Fuji compacts on to larger Nikon DSLRs. I was very happy with the size and performance of my Nikon D7000 until I had a chance to shoot a full-frame D800 camera. My feeling now is that I don’t mind the increased size if I can get better quality, a much broader dynamic range and have faster performance with better control. It’s all going to go in one bag anyway, so you might as well fill it! I had brought two complete Nauticam DSLR systems to Fiji, my trusty Nikon D7000 and a new D800 full-frame, thinking to try one against the other – size vs. performance. I also thought that the other folks might want to try one out. However, no one took me up on the offer; they all elected to stick with the cameras they brought with them.

I had rented the D800 body and Sigma 15mmFE and heartily endorse the idea of renting a camera or specialty lens for a trip, especially if you aren’t sure what you want, or won’t use it very often. (I wanted to also look at the new D600 later on.) Moving from cropped-sensor DX to full-frame FX will entail changing several lenses, as most DX lenses simply don’t have enough resolution to use with a 36MP sensor. I plan on trying out professional quality lenses, and buying them only after I have enough experience to justify their expense.

I shot the D7000 the first day, with my usual Tokina 10-17 and then switched over to the D800, shooting with a Sigma 15mm fisheye lens, which for a relatively inexpensive lens is very sharp and focuses much closer than the 16mm Nikon FE. I later added a Kenko 1.4x teleconverter to the Sigma wide angle (while adding a 20mm extension) and really liked the magnified sharpness that the 21mm rectilinear format setup provided. You lose a little image area, but it seems to pull in and focus the fine details of the corals with less distortion at the corners.

The 105VR macro shoots about like the 60mm macro does on DX, with a bit more reach, but subsequently it is harder to lock focus. I would recommend using at least a +5 diopter, maybe more, depending on what you want to shoot. This allowed me to get much closer and eliminate some water between the subjects and myself. I did find that it wouldn’t lock focus at distance on the D800, unlike using it on the D7000, where I like to shoot fish headshots. The difference in dynamic range, detail and overall image quality with the D800 was much greater than I expected on full-frame, and after reviewing the images on my computer, the D7000, while an amazing camera, just didn’t compare. All of a sudden this became an expensive dive trip!

But a larger physical-sized rig has advantages. The Nauticam D800 has incredibly nice controls, many moved out to levers, they are spread out and fall right under my hands. Even better when using gloves in cold water. My favorite is the ISO: flip it down, scroll with the main control wheel and pop it back up. With the D7000, and most Nikons, if you select menu item “hold button until released”, it can work the same way, but with a push of a button instead of a lever. It saves having to use two hands to make an ISO or other change.

The one thing I really would miss from the D7000 is the small Zen 100mm dome port, along with the Tokina 10-17 FE zoom lens. You can really cram it into smaller spots when shooting CF/WA. With full-frame, you really have to shoot a larger dome, and I was using the 8.5” acrylic dome on this trip. The advantages of a larger dome are many: better corners and overall quality, the ability to use more wide-open f-stops and the ability to shoot over-and-unders. I would probably switch to a Zen 200mm or large 230mm mega-dome glass port for a little more crispness.

Getting used to shooting in high ISOs was the biggest change for me. It felt really “wrong” to use ISO 800 in the caves, as I’m so used to getting a lot of noise as a result. The D800 and other new FX cameras can be shot at very high ISOs without penalty. ISO 800 looks about like 200 on a DX camera and even higher ISO settings of 1200 or above show little noise. As I progress, I will find that shooting in available light, and maybe experimenting with filters at higher ISOs will be a huge sea-change and will open up a lot of new avenues for shooting shallow water, deeper wrecks, caves, or at night.

“Batting” It All Around
Every night at Taveuni we had hundreds of huge fruit bats come home to roost in the trees. Chirping, chattering and the occasional full screams accompanied our nights’ rest. Like the difference in technology between my cameras, the contrasts between the colorful soft corals and primal bats, the modern hotel in its eco-friendly surroundings and the primitive local houses, made for an interesting cultural experience.