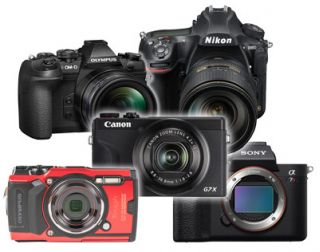 Looking to get started in underwater photography? Or are you planning to upgrade from your current system? Here are Optical Ocean's top underwater camera choices for the winter of 2019-2020.

Fourteen underwater photographers joined Optical Ocean sales owner Jack Connick on an expedition to the Rock Islands of Palau in late November of 2013. After a long flight, they joined onboard the Palau Aggressor liveaboard on an extended, 10 day cruise.

With the weather wet and warm, the comforts of the ship were welcomed. Spacious cabins, sun deck, a large camera table, salon and dinning areas let the large group spread out comfortably. Diving was from a skiff, with all dive gear left aboard. It was lifted from the water after each dive, so divers just had to step onboard, cameras were loaded onto the skiff's camera table by the crew. Besides Captain Marc, there were 2-3 guides and drivers onboard, as well as chief, stewardess and stewards; all-in-all treating us to great, professional service.

After getting organized and briefed, we headed out of port to enjoy the outer reefs. No hour-long day boat rides for us, dive sites were within 15 minutes, more or less. Palau is in danger 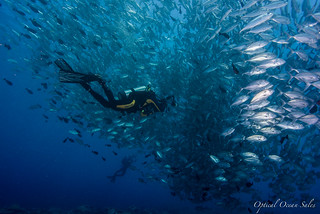 of being “over-loved” by divers and sites can get crowded. We were generally first on the sites in the morning and having lunch while the day boats were diving. Continuing to avoid the crowds, we dove into the late afternoon with a few night dives after that. Multiple dives on many of the sites let the expedition try various lens combinations and techniques. Many times, varying currents allowed divers to also try different directions and depths as well. For the most part, currents were very light, even on sites like Peleliu and Blue Corners.

Palau is famous for having nearly every type of marine animal in abundance, and one never quite knew what you'd see; sharks, turtles, giant wrasse, eels, enormous schools of Jacks, as well as macro life; with nudibranchs and small fish, like Square-spot Anthias, challenging our photographic abilities. Dives were set up especially to shoot Reef Mantas, which came zooming up German Channel late in day. Walls were decorated in vivid hues of sponges, anemones, huge fans, corals of every shape and kind, as well as many other colorful invertebrates.

Starting on the outer reefs, we dove the Turtle Cove, Blue Corner, German Channel areas. Then we continued down to the island of Peleliu for a couple of 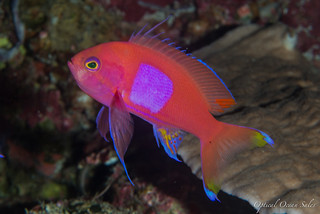 days. While there, we enjoyed a tour of this battlefield, home of some of the bloodiest fighting in the Pacific theatre of World War II. Bomb disposal teams are still actively working to clear ordinance from the area - 60 years later.

Returning to the Turtle Cove area, we dove some of those sites as well as Ngemelis Wall - enjoying a little more sun for better wide-angle photos. We also dove Blue Hole on a couple of occasions, enjoying the dramatic lighting and framing afforded in those caves.

The next day, while the Aggressor moved up to anchor as close as she could to Ulong Reef, the skiff departed for a sunny morning of 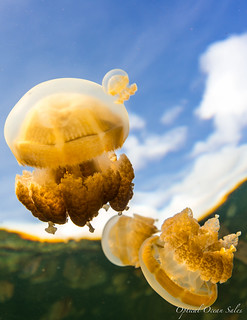 snorkeling famous Jellyfish Lake. Conditions couldn't of been better as the group hiked over the steep ridge, with a sunny day giving us lots of color to work with. As we could afford the time, Captain Marc led us on a long swim to the other end of the brackish lake where there were more of the yellow, non-stinging jellyfish to take photos with many different techniques being tried. I had envisioned a shot utilizing a type of refractive physics called "Snell's Window" that focuses the sky and surrounding area behind the subject clearly in a circle. Aiming my rig by sight at arms’ length, it took many tries, but I got a few keepers in the end.

The lake also is home to a species of cardinalfish. Snorkeling amongst the mangrove roots along the shore they were completely tame to my camera lens.

That afternoon, we started diving Ulong Reef. Ulong Wall, Ulong Channel, the Coral Gardens on top and Siaes Tunnel were enjoyed repeatedly. Siaes is a cavern at a starting depth of 90', but it's long entrances made for some great photos of the divers and fauna there. A nearby sand bar was also dove late in the day to shoot some macro subjects there.

Heading back into the lagoon, and enjoying a skiff tour of the Rock Islands, we dove a couple of large WWII wrecked ships and a Japanese seaplane there. Visibility was very poor, and a crew was surveying the crashed "Jake" plane to see how it had deteriorated. But it was something different; certainly another attraction of the diving in Palau. 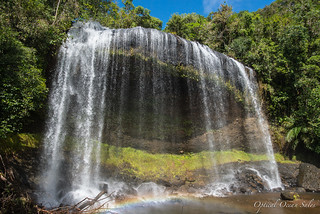 After arriving back to Korror, we went on a land tour, driving out of town to he north a couple of hours, stopping to view farms, scenery and old Japanese gun emplacements, we went on a tour to a huge waterfall in the dense jungle. Palau certainly was an adventure, and the longer cruise was worth the extra time and expense to truly enjoy this amazing South Sea paradise.

Photo Notes: I was shooting my Nikon D800 in a Nauticam housing with a variety of lenses. For macro I shot a Nikon 105mm VR with a +5 diopter. Also experimented with a 60mm macro, but found it really didn't have enough power. For wide angle, I shot a Nikon 17-35 f2.8 (which I like over the 16-35, because of it's speed), a Sigma 15mmFE, both behind a smaller Zen 170mm dome port. I found the Zen 170mm dome to work quite well, shooting about the same as the larger 8" acrylic dome I shot in Fiji earlier. It packed very well with my entire system fitting in a Seahorse rollaboard case.