Home/Blog/Trip Reports/Sea of Cortez: The Only Sure Thing is Whale Sharks 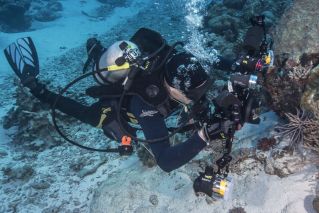 There are a few things that determine the amount of color saturation and image clarity in underwater photography: depth, ambient light, and water clarity. Obviously you're not in control of the depth that your subject is at, or the water clarity, but you do have some say in the amount of light.

Twenty-one underwater photographersboarded the Solmar V dive boat in Cabo San Lucas, Mexico, on June 23rd expecting to steam the next 25 hours to the Revigadagos Islands, aka "The Socorros", 250 miles offshore. Alas, "Amanda" had other ideas.

Having built up to a Category 4 Hurricane, Amanda was an early violent storm a few hundred miles south of Socorro Island and heading straight for the area we were to dive. Needless to say, the Captain told me that we had to make a big change and head north into the Sea of Cortez. I had taken several trips to the Sea of Cortez ten years ago, but I hadn't enjoyed the long runs to the dive sites from shore. This would be a great opportunity to re-explore it from the comfort of a large live-aboard.

The good news was that the diving there is pretty good, and we could be diving the next morning in Cabo Pulmo.

After a checkout dive, we dropped on the wreck of an old tuna boat, descending right through 9 large bull sharks. Enjoying large schools of grunts and snappers. We explored what was left of the old boat, really just a few large pieces, seeing the large sharks circling in and out amongst our group in somewhat murky conditions. 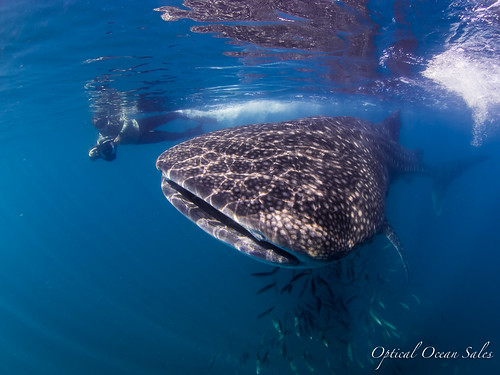 Continuing north towards La Paz, we dove La Reina and Swanee Rock, both teaming with life. Diving in the Sea of Cortez is very "fishy" with huge schools of grunts, snappers, goatfish and others on nearly every site. Friendly pandemic green morays also greet you from almost every hole. Corals are mostly hard, and not all that colorful, so the aquatic fish life is what you go for. Yellowtail sturgeon fish, puffer fish of every variety, colorful hawk fish, and grouper abound on nearly every site.

However, with a boat load of photographers bent on looking for large animals, we decided to take some chances. Whale Sharks are found in La Paz bay in the Spring; but there had been no reports so far. Would we spend a half-day to cruise the bay and most likely find nothing? A multi-cultural debate raged that evening over dinner, as the French contingent felt the whale sharks weren’t guaranteed, but were finally out voted.

Good thing too, as the next morning we arrived at the bay and no less than 5 Whale Sharks were waiting for us to free dive with! We broke into the pangas and with our guide Geronimo acting as a drill instructor – “Swim!! You guys want to see whale sharks, you have to swim faster! Over there…, swim!” We all had a lot of laughs and got run over by these 25’ gentle giants while taking photos. 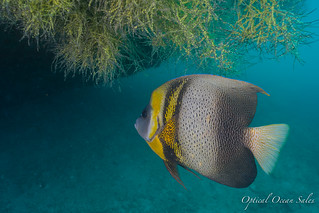 Using available light and wide angle lenses, it was “gun and go” - no time to compose, just shoot shutter priority and hope for the best. In the end, we all got a lot of great shots and had a great time in the beautiful bay that morning.

Continuing north, we finished the day on the wreck of the “Fang Ming”, an old freighter that had been confiscated by the government and sunk many years ago. A large green turtle swam into the wreck and pandemic Cortez Angelfish were playing along the sides. Visibility was poor, but I was able to shoot some video and some interiors. 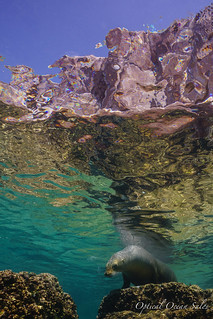 The next morning, we traveled north to the EL Bajo sea mount, hoping to find hammerhead sharks. We tried on a couple of deeper dives but had no luck, so we came back to the small islands of Los Isolotes. They are home to a large sea lion rookery, as well as swim throughs, and another shallower seamount called El Bajalito. The next morning we had sunny skies and many dives with the very frisky sea lions. The young ones love to play with divers and snorkelers and make great photo subjects, hamming it up for the cameras, but watch out for the bulls!

After a day and a half there, we again went south to La Paz to try for more whale sharks, as they were a “sure-thing” at that point. Succeeding with a few, we wore ourselves out again swimming with these huge fish. Next, we repaired to Swanee Rock for shallow dives on the reef. Huge schools of spot-tail grunts swarmed over the divers and followed us around. “Can someone get the fish out of the way? I can’t see the reef…” Some divers also found a few sea lions to play with.

On the way back to Cabo the next day, we hit Cabo Pulmo for another morning’s dives on the tuna boat wreck, but the sharks were even more shy. Arriving back in to port, we reflected on what a nice week we had in the Sea of Cortez. Even though Amanda had had her way with us, we rolled the dice and came up with a winner!

Mirrorless in Mexico
On this trip I left behind my trusty, large, D800/Nauticam rig and decided to try two new mirrorless cameras: The Olympus OM-D EM-1 m4/3rds camera in a new Aquatica housing system, and a Sony a7 full-frame camera in a Nauticam housing. 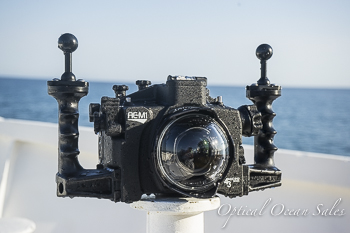 They were much smaller to pack and handle and the results were better than I had hoped for, particularly with the Olympus and Panasonic 8mm combination and the Sony a7 with an old Nikonos 15mm FE amphibious lens. Both of these were much easier to swim with than my D800, and although the results aren’t quite as impressive as the professional formats, they were pretty darn good.

We, my friend Jim Boon and I, shot the Olympus EM1 with the 8mm and 9-18 lenses quite a bit. (We hadn’t brought any macro lenses, expecting to be shooting all large animals.) The 9-18 behind Aquatica’s new SMC dome was quite impressive, allowing for a nice range of focal lengths from close-focus wide angle to more moderate shots. It was very balanced and rugged, with easy to reach controls. Port and lens changes were easy, and the cam latch made access to the camera literally a snap. 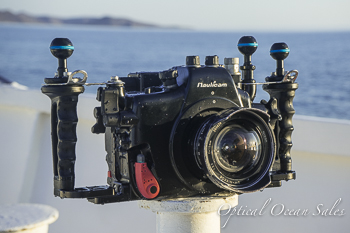 The Sony a7 (and a7r) are very impressive; the first full-frame camera in a mirrorless body! Being much smaller and lighter than the D800 made it easy to carry around, and I shot it with the kit 28-70 as well as the Nikonos 15mm FE. The kit lens works pretty well, but is average in focal length range, like most kit lenses. It probably works best as a close up lens, but again not having one along I could only shoot fish portraits and moderate wide angle.

The legendary Nikonos 15mm FE, mounted in an adapter, lived up to its reputation by delivering stunning wide angle, even though it is a manual aperture and focus film lens. By setting it to f/9-f/11, I had a large depth of field for focus. It was also easy to use Sony’s focus peaking feature to “fire when you see the red of their eyes” and know you had the shot nailed. I used both the large rear view screen and the electronic viewfinder with an external viewfinder to good result with a wide range of displays offered.

Video is one-touch on both cameras, and they shoot very smoothly with continuous auto-focus.

Choices, Choices, Choices
Which did I prefer? Well, the Sony a7 is definitely better in low light, and it delivers a wide dynamic range of color and detail, but I really liked the lenses available on the Olympus EM1. Its dynamic range and sharpness was excellent - Jim and I both felt it is as good or better than the DSLRs we have shot. The Sony a7 will come into its own as new Zeiss lenses come out. So maybe the edge goes to the Olympus EM1 right now, which is the less expensive format as well.

Sea of Cortez from Optical Ocean Sales on Vimeo.