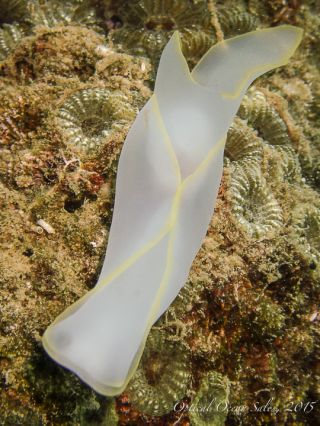 I recently had the opportunity to dive the latest revise of the venerable Olympus Tough TG line up, the TG-4. This camera is nearly identical to last year’s TG-3, with the addition of capturing RAW files, an additional underwater HDR scene mode and a few software tweaks.
I had brought it along on a whim with a raft of much more powerful cameras. But most of them were delayed when I had to make a fast transfer of flights. So for the first few days of my Solomon Islands trip I relied on it and the Olympus E-M1 I had in my carry on.
Read more
Nov 4, 2014  Jack Connick  Equipment Reviews
Looking over the new Olympus PT-EP12 housing for the new PEN E-PL7 camera one is immediately struck by how much smaller it is and with a new shorter port it’s a lot more sleeker than all it’s predecessors.

Although it’s also shorter, lighter and thinner; the PT-EP12’s polycarbonate shell is still depth-rated to 147 feet (45 meters). The new housing design feels more like the compact PT-056 for the Olympus TG-3, than the older PT-EP10 for the PEN E-PL5. New are a larger, angled shutter release, easier-to-reach zoom and mode dials, and slanted function buttons - all very ergonomic to use and easier to hold. There’s a few other improvements like a larger rubber view-screen shade. Loading is still drop in and it accommodates the Olympus flash for triggering an optical sync external strobe like their new UFL-3 - a slightly revised Sea & Sea YS-01 with improved software for Olympus cameras to use RC two-way communications mode, and allows for on camera adjustments and much higher sync speeds. The internal flash and it’s housing window is too small to be used for anything else.

Features like two fiber optic sync cord plugs, cold shoe mount and a backed front and clear back are continued, as is its three-hole mounting plate. With its smaller size some smaller trays will probably fit it; so the entire rig becomes less bulky.

This new M.Zuiko Digital 14-42mm f3.5-5.6 MKIII EZ lens has a 3X electronic zoom capability that will be great for video, just like a camcorder you can now smoothly zoom in and out on your subject. The new lens uses their best ED glass, so it is a much sharper and higher quality lens than the kit 14-42mm MKII. The port on the EP-PT12 housing is now 67mm threaded and will work well with wet macro lenses, as there's not nearly the amount of dead air between it and the end of the port - so it will magnify the subject a little more. It’s also much, much smaller than the older port. The new MKIII EZ lens also focuses a little closer than the older MKII. But I would plan buying a couple of Zen ports to complete the system to use the Olympus 60mm macro and the 9-18mm w/a lenses. Using wet wide angle lenses with these SLRs is not recommended; you simply get too much chromatic aberration and distortion, along with very poor corners in your shots.

The bad news also is that not only is the new port NOT compatible with the mz 14-42mm MK II kit lens that is bundled with the E-PL7, nor is it with the 60mm macro or mz 9-18 lenses - unlike all the other older PEN housings. This was always a nice feature for users; buy one housing and it would work with the same zoom gear and port that you got with the housing with other lenses.

I know that users may not quite get what Olympus was thinking, but the old port was pretty clunky in design and the new housing is much better suited to the small E-PL5 camera. The problem is that Olympus still views the ports on the EP-series, including the new PT-EP12 as non-interchangeable, even though it is obviously an easy change; remove the keeper screw, twist the bayonet mount port half and turn and pull out.

Zen has made replacement ports for some time now and their PEN series also fit this housing; but they are relatively expensive at around $500 each for the WA-100-EP dome and 45mm flat port (FP-100-EP)+ 25mm extension (ER-EP-25) for the 60mm macro, which sort of defeats the idea of a less expensive mirrorless setup than the OM-D EM1.

However, all-in-all its a nice improvement and hopefully some less expensive port options will be coming along.
My Account
More Information
Customer Care
About us