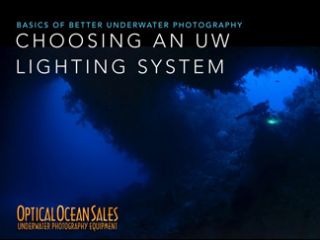 Adding a lighting system can make one of the largest differences for your underwater photography and videos.

There are a few things that determine the amount of color saturation and image clarity in underwater photography: depth, ambient light, and water clarity. Obviously you're not in control of the depth that your subject is at, or the water clarity, but you do have some say in the amount of light.

One Camera, One Lens -
An Ascent from Desperation.

I’m just back from a 10 day live aboard dive trip to the Solomon Islands. I had packed 5 different cameras and systems to do a round table of testing and comparing in order to write some practical reviews.

As usual, I spent time going over each camera system making sure I had packed all the necessary batteries, chargers, lenses and attachments. All was reasonably packed into two cases. One was carried aboard and my Seahorse hard case and dive bag/clothes checked. With everything spread out the day before, I tried to balance their weights, airline requirements for lith-ion batteries etc. What I didn’t do was to make sure that essential chargers, batteries and mounts were all packed together with each camera. Oops. 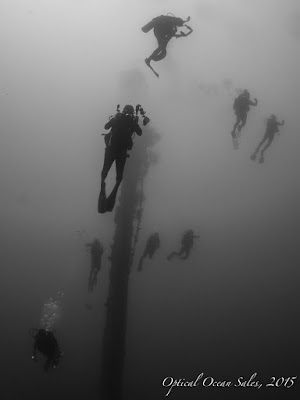 I got to the airport only to see that my LA flight was delayed 3 hours. What’s up? Thunderstorms in LA I was told. Lighting had closed LAX on and off all day…Thunderstorms? Lighting? In a 3 year drought? Why me?…

Things improved as time went on and my flight was only 2 hours late getting in. I ran to the International Terminal and made it to the flight to Fiji just in time. But my checked luggage didn’t. I was told I could go without my bags or not go. No choice, I had the M/V Solomon Star to meet in Honiara.

So the next time I saw my bags was a week later on a dock in Tulagi. Groan.

When I landed, we hit a thrift store for a few clothes and the boat had great new rental dive gear they outfitted me with; so that was all good. My backpack had essentials. I had the one camera bag poorly packed with strobes and no mounts, cameras without housings or chargers. But I did have the Olympus E-M1 body, PT-EP11 housing, new mz 8mm f/1.8 Fisheye PRO lens and matching small glass dome port, along with an iTorch v25 1800 lumen video/focus light. So there was hope. 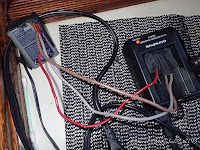 And as luck would have it, friend and customer Bruce Versteegh was on the same boat with his wife. They had brought way too much gear and lent me a strobe, sync cord and arms. So I had the one camera and wide angle lens and for the next 5 days (along with a small TG-4 compact). Thanks Bruce, you saved me!!

One problem; no charger. Bruce only had the charger for his PM-1 system. So we had to “hotwire” leads from his charger to my E-M1 battery in a feat worthy of Rube Goldberg. Most of time it worked with lots of gaffer tape, but sometimes it didn’t; as we were in high wind and fairly heavy seas. Oh well, frustrating. 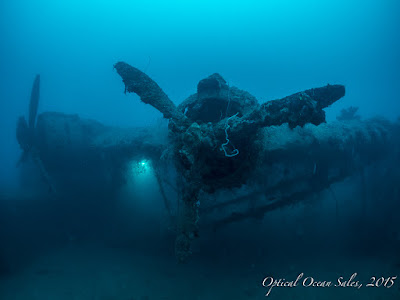 The Olympus 8mm lens saved the day. Light? Who needs light? I was able to easily shoot available light at 45 meters deep at f/2.2 or even f/4. The lens focuses and gathers light so well that it’s easy to shoot in whatever conditions you find. The PRO lenses are a huge jump up in design and quality from the other standard PEN lenses that Oly has had on the market. They have metal, weather-proofed construction with large elements. Sharp, fast and durable, they are truly joy to use. There is also a new f/1.8 7-14mm wide angle lens due to hit the market very shortly.

The first dives were very deep; 30 to 45 meters to the bottom of Tulagi Harbor. it was a famous repair base used by the British before the war, invaded by Japan and taken back by the Americans in 1942. It’s still in use today.

The first dive was on a four engine Japanese Kawanishi H8K2 (Emily) flying boat seaplane, lying still on the bottom, with the erie glow of divers’ lights looking like it might be getting ready to take of from it’s alien home. 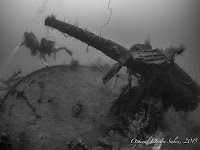 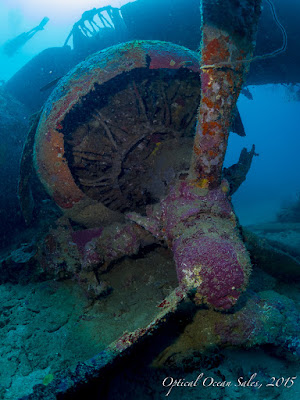 The next dives were on a 455’ freighter (sunk before the war), an American Catalina PBY seaplane, and a smaller freighter with a nice bow gun still pointing up towards it’s attackers. The system shot easily, locking focus without a beat and
getting nice images. I had been provided a manual focus gear, but never used it. Without proper external lighting, I shot in available light and some of the images look great in black and white, which adds to their gritty wartime-like texture.

The 8mm FE lens focuses right down to the small glass dome port, so close focus wide angle shots are no problem. For the Catalina, I jammed the camera on the bottom under a wrecked engine and shot up, capturing the entire front of the plane at f/4. I used the small iTorch v25 light to add some color to the engine cowling and prop which were coated in coral.

More scenic dives the next few days gave me a chance to try out capturing fans, soft corals and undersea life. As expected, the E-M1 and 8mm FE lens worked flawlessly to shoot these types of subjects to fill the frame with color and detail. While all ultra wide lenses are sensitive to flare from strobes, this combo, using the small dome, was pretty easy to work with and aim my strobe from behind and out. Smaller arms can be used and this has a reducing effect on overall system size. 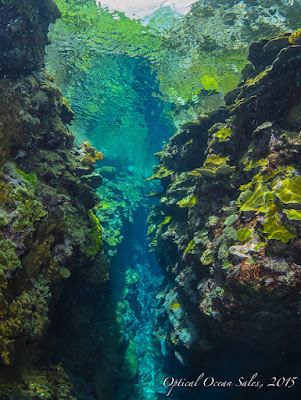 We were also taken to a very unusual cave system. It had a tunnel entrance under the water that opened into a small, very still, land-locked lagoon in the interior of the rocky island. Called “Mirror Pond”, the surface was so clear and still that it disappeared, with jungle and cave becoming one. What we weren’t expecting was the bright, sharp rays of sunlight shooting through the forest canopy and creating striking beams of light underwater.

Slow shutter speeds are what is necessary to capture these sorts of situations. On my full-frame camera, I usually use high ISOs; on this camera and lens it was fast enough that higher ISO’s aren’t necessary. In some cases I think I could of dialed the ISO down to get better dynamic range and still had it work fine.

The shots are crispy sharp even at ISO 640, f2.2, 1/60th sec. This is also where the combination of 5 axis stabilization of the E-M1 body and the bright f/1/8 lens really came into play. You can shoot wide open at slow shutter speeds and still capture very sharp images. 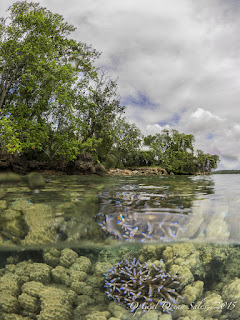 I also shot a couple of “over & unders”, not thinking that I’d get much with the small 100mm dome, as usually they aren’t big enough and the line of the surface on the dome is large and chunky. Since the water was so still, I was able to “dip and shoot” and not have a very thick surface line in the shots. I think this is also a tribute to the quality of the new Olympus PPO-EP02 glass dome port.

Olympus has dropped the ball for PEN and OM-D E-M5II owners to directly use this lens/dome combo. For some weird reason, they are only directly supporting the E-M5 EP-08 and E-M1 PT-EP11 housings. They have made some mention of having to return your Olympus housing to them in order to change ports - something that no other manufacturer has done. This is a very simple task of undoing one screw and twisting the port a half turn to unlock the bayonet and pulling it out. Why they insist that end-users can’t do this is a mystery and has been going on since the E-PL1 first came out. There also is no port from Olympus to support the other new 7-14mm PRO lens. I have discussed this with Olympus America and they are hoping that the parent company comes around with a better solution. 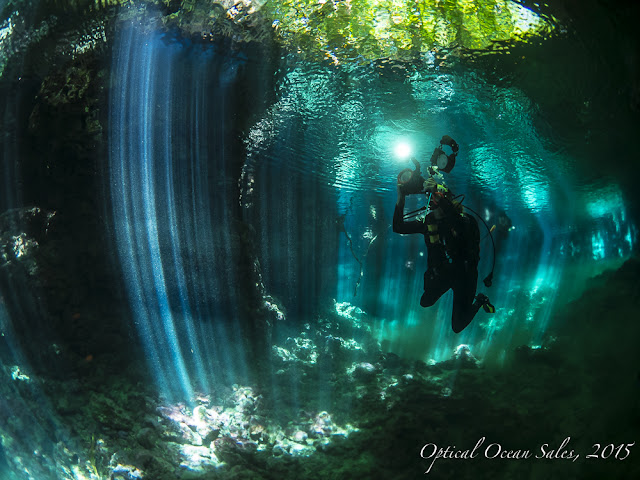 Fortunately, Zen has a ready-to-go solution using their DP-100 EP-08 Dome along with an adapter or two to house it on these Olympus housings. There are several port solutions for Nauticam and Aquatica housing owners as well. 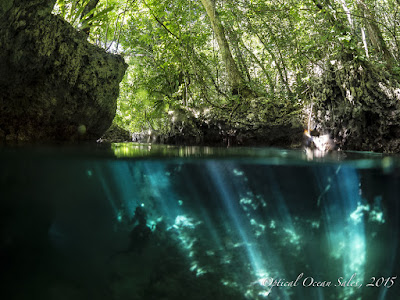 This is such a small setup, so fast, sharp and easy-to-use in all conditions, that I am giving some thought to packing it along with my full frame. It would be great for free diving with large animals and great to take into tight places like caves and wrecks, where a larger system is burdensome.

After shooting the Olympus EM-1, MZ f/1.8 Fisheye Lens and PPO-EP02 Dome for a week, I have to say that Olympus has really hit one out of the park. It’s a must have for all Olympus PEN and OM-D underwater photographers.