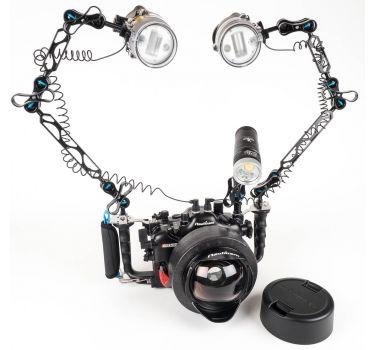 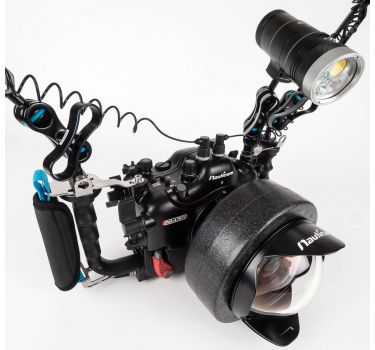 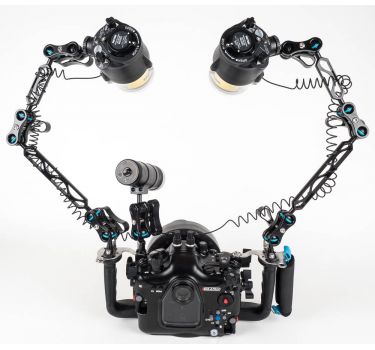 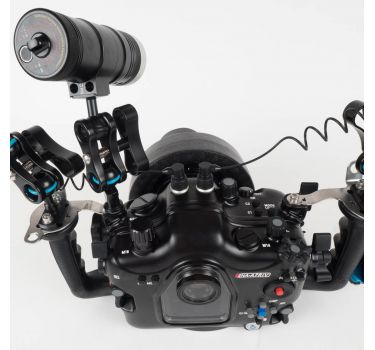 Combines the Nauticam NA-A7RIV Housing with the Nauticam WWL-1 and port for use with the FE Sony 28mm f/2 lens. Included also is a great lighting system consisting of 2 Sea & Sea YS-D2J strobes, mini flash trigger, fiber optic sync cords and the Kraken Hydra 3500+S lumen light. This system is a compact mirrorless SLR package that works well for any underwater adventure!

Despite its high resolution, it can shoot at up to 10 frames per second with full autofocus and shoot 4K video either from the full width of its sensor or from a Super 35 crop. It also gains a 16-shot high-resolution mode that can be used to generate 240MP images of static scenes.

The NA-A7RIV underwater housing provides fingertip access to all key camera controls in a rugged and reliable aluminum underwater housing.  Ergonomic camera control access is one of the defining strengths of a Nauticam housing, and the NA-7RIV continues this tradition. Essential camera parameter changes are made from the handles, without awkward reaches.

The NA-A7RIV housing inherits the core design elements from the Nauticam pro DSLR range, and bundles them in a more compact package.  A patented port locking lever allows lens changes to be made in seconds. Opening the housing for quick battery and media changes is fast and easy with the locking housing latches. All aspects of the system are a seamless extension of the camera.

The Kraken Hydra 3500+S lumen light has 2 buttons for ease of use, a water resistant light head for flood protection, as well as spot, flood and red beams. It features a COB LED for the best, and most uniform, flood beams for your photography and video needs.

This 3500+S Video Light also comes with the added feature of having a Spot and UV light along with the Wide and Red light. So it can be used as a regular dive light, or as a focus or video light as well. Divers who want to shoot fluorescent photography will have a strong light source. The two button layout mean that you use one button to select the mode, and the other to select the output level. No hard-to-remember sequences on a single button. All of the lights utilize multi-cell battery packs, with quality, fast chargers. Recharge time is about 3 hours from a completely drained state. Extra battery packs are available.

I ended up with far more keepers than normal. I continue to be impressed with Nauticam housings and Sony cameras, and this was without a doubt the easiest and most rewarding photo week yet!
Write a review
My Account
More Information
Customer Care
About us