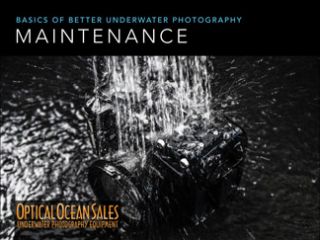 We just received our first Nauticam NA-6300 housing for the Sony a6300 camera. We noticed quite a few refinements and small additions over their older NA-6000 housing that we thought we’d report on.

The size and weight is about the same as the older housing, and a bit more rounded and tapered on the top. There are many small changes like larger more robust knobs present throughout.

The first thing we saw was that there are now two bulkhead ports to accommodate both M14 and M16 bulkheads, or the new push button vacuum release valve. It works with the included leak detection electronics of the housing to quickly let you know if you have a pressure leak before it becomes a water intrusion. Having dual bulkhead ports was first introduced on larger SLRs, then on the small Sony NA-RX100IV housing. It gives you the ability to add the vacuum valve and either an external monitor like the SmallHD 502, or an electrical bulkhead for strobes.

Speaking of strobes, we also noticed that Nauticam has slightly canted the optical port cover to allow for a little less strain on sync cords and better passage of light.

One of the main control improvements is with the shutter release. It’s now a little longer and sleeker, with a more tapered design at a slight angle to allow easier usage. But one of the coolest improvements over the a6000 housing, is the included external shutter release trigger and brackets.

When mounted under the brackets with Nauticam’s adjustable FlexiTray, it allows you to adjust the trigger to be directly under your fingertips and to adjust the amount of “pull” you like to obtain a half-press for AF and release the shutter. Introduced last year, this external trigger has also had some small tweaks. The brackets now have the little black plastic shims locked into place and thumbscrews are now provided, which makes this much easier to assemble.

Having these extras included along with the usual complete set of extra brings, grease and tools, shows the attention to detail that Nauticam brings to their products. 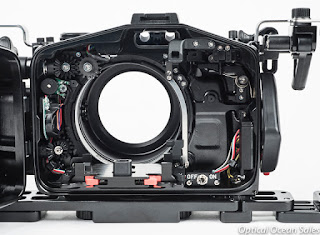 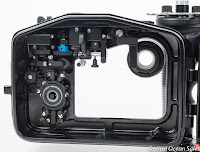 That detail also shows when moving to the inside of the housing. Keeping the housing small and moving controls to a logical position, they are ergonomically laid out so they are comfortable to access. All the usual Nauticam innovations are present such as the locking, movable “foolproof” bayonet port system and interchangeable eyepiece for the viewfinder. Noticeably, the lens release has been moved to the lower left via a long lever to a much better position. The electronics for the leak detain system are now also sealed, except for the battery.

The NA-6300 works well with the rest of the Nauticam optics system. They support a very wide array of ports for consumer and pro E-mount lenses. Although the Sony 16-50mm power zoom lens is not as highly regarded as the other Zeiss models, Nauticam has developed a high-quality versatile solution for this “kit” lens with their WWL-1 Wide Angle Lens and CMC-1 Compact Macro Converter. This allows for a “one lens” solution to cover everything from macro to 130° FOV wide angle shots and is perfect for video with the electronic zoom capabilities of the lens. (See our earlier report here for photos using a similar Olympus solution). 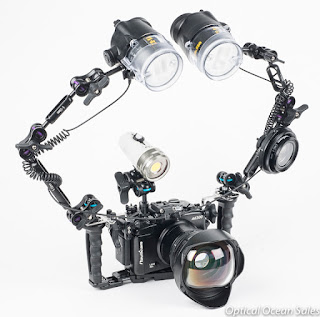 We think the Sony a6300 is a winner with 4K video and 24 MP stills and much improved AF and metal body construction. It has has a lot of great improvements that make it a strong successor to the Sony line-up. Nauticam has taken that baton and carried it across the finish line with their elegant NA-6300 underwater housing.
My Account
More Information
Customer Care
About us