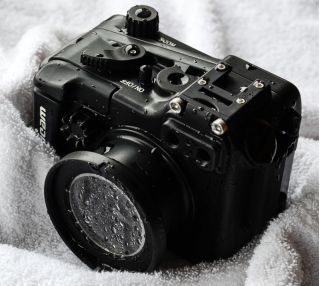 By Bill Van Antwerp
One of the more common questions we get asked, particularly from newer underwater photographers is “I am going to shoot some photos and some video; do I really need a strobe and a focus/video light or can I get buy with just a light?”

To answer the question I set up some tests both in the studio and while diving from the Conception at San Miguel Island (Channel Islands, CA). In the studio setup shown below, I set up a “mandarin fish” in a bed of rocks. The fish is about 2 inches long. For the test in the studio and in the water, I was shooting an Olympus OMD-EM5 in a Nauticam NA-EM5 housing with 2 Sea and Sea YS-D1 strobes using the 12-50 Olympus lens in the Nauticam focus port. For continuous lighting, I used either one or two Light and Motion Sola 1200s, iTorch Pro 6s or Nocturnal Lights M700i.

In the fashion and portrait studio world, LED lighting is becoming wildly popular because with studio LED panels both the color temperature and the brightness can be adjusted on the fly. Underwater we have no such luxury and none of the three lights that we tested had continuously variable intensity levels, but rather two (Nocturnal) or three (iTorch and L&M) levels of brightness.

The setup at top shows two strobes and a single focus light; for the case of two lights the lights were placed where the strobe are shown.

Figure 2: For a baseline, I shot my mandarin fish at 1/250th of a second and f/22 at the native ISO of the camera, 200. The photo above shows the results of this shot with both YS-D1 strobes set at 0 power. A flash meter reading suggested F/18 for this shot and notice the background is a bit dark but overall this is well exposed and notice that the depth of field is quite large.

One advantage of shooting with strobes is that you can have exquisite control of the depth of field by manipulation of the aperture. Below is a shot of the fish at 1/250th and f/6.3 (the minimum of this lens). The strobes were shot at minimum power for the strobe on the left and 1 notch above minimum power for the strobe on the right allowing for adjustment of the darkness of the shadow on the left rear of the photo.

Figure 3: Notice the out of focus areas of the rocks in the foreground. Moving to the use of LED lighting instead of strobes, it was immediately apparent that 1/250 and f/22 were not useful parameters for shooting, all photos were essentially black. Trying to shoot fast moving fish like mandarin fish requires a fast shutter speed so our first attempt at continuous lighting is shown below at f/6.3 and 1/250th shutter speed.

Figure 4: This was shot with two iTorch Pro 6 lights, both set at full power. Looking at this photo in Lightroom suggests that this photo is 3 stops under exposed. A similar photo with 2 x L&M Sola 1200 video lights shows a bit more exposure (1/3 stop or so) but still underexposed significantly.

Figure 5: From this series of tests, it is quite obvious that we will not be able to get enough LED lights on our housing to get to reasonable exposures at 1/250th of a second but there are two more buttons we get to play with. The first is shutter speed.

What happens if we slow it down? In the studio, my little fish is not moving too quickly so we set up the shot at 1/80th shutter speed and f/6.3.

Figure 6: This is better but still a bit dark. Of course we could fix this in LR/Aperture or Photoshop but getting it right in the camera is our goal. Since 1/80th of a second is probably as slow a shutter speed as we can think about, our next step is change the ISO. If we up the ISO from 200 to 800 (two stops) we should be getting somewhere. Sure enough at 1/125th second and f/6.3 and ISO 800 we get a reasonably well-exposed photo.


Figure 8: So in the studio, we can use two iTorch or Sola lights and get quite nice results without using any strobes if we rely on the high ISO capability of the camera. One interesting observation from this in-studio experiment is that the Sola and iTorch lights were within about ½ stop of each other with the Sola being a bit brighter in this application. The Nocturnal Lighting lights were about a full stop less bright than the iTorch or Sola lights, which is consistent with their specifications.

This is all well and good in the studio, what happens in the cold, relatively dark world at 60 feet deep near San Miguel Island? The picture below of a Phidiana hiltoni on a white stage is at 1/250th of a second at f/20.

Figure 9: This was shot with the OMD and two YS-D1 strobes at about 0.7 or 1.0 on the strobe power setting. This is about twice as much light as we used in the studio. The photo below shows the same nudibranch on the same stage and shot at 1/250th of a second (it was quite surgy) but at f/4 using the Olympus 60 mm macro lens.

Figure 10: Notice that it is quite underexposed but LR/Aperture can fix it up quite a bit although getting the focus point just right at such low depth of field is quite difficult.


Figure 11: Notice the exposure is adjusted by about 2.35 stops and the white balance adjusted as well.

Figure 14: This photo is clearly better-exposed but DOF is difficult to control at such large apertures and slow shutter speeds.


Lights or Strobes?
The conclusion to this story is complex but the answer to the question is “of course you can use a light instead of a strobe and if you are lucky and willing to push the ISO of your photos then you can probably get some nice shots”.

For me, the bottom line is simple; strobes give you much more control of your photos and moreover can get you TTL exposure if you are not interested in using manual settings. Strobes are much more powerful than even the highest-powered LED lighting, so shooting at high shutter speeds and small apertures is possible. That being said, if you shoot mostly video and want to shoot an occasional photo then a couple of relatively high-powered video lights can do the job, but remember to push the ISO to 1600 or so.